26/03/2019
Part one of a two-part features series on the Asian Peasant Coalition (APC) in commemoration of the Day of the Landless on 29 March. 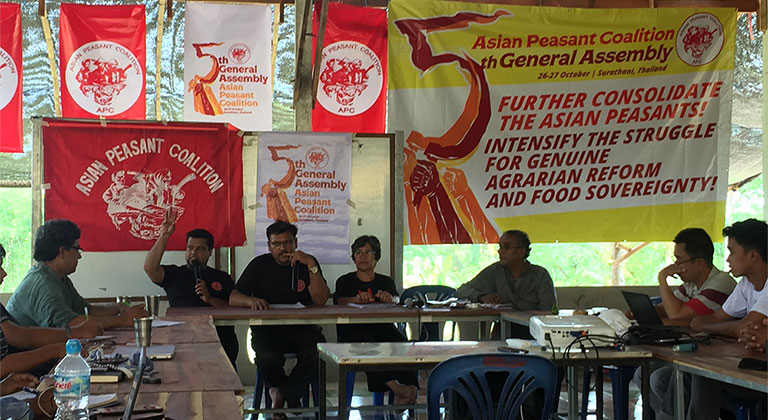 Perhaps there is no greater irony in the 21st century than the fact of landlessness that millions of peasants grapple with in the face of a global land rush — the large-scale acquisition, lease, or concession of lands in corporations’ bid to seek resources most profitable in the global markets.

The resulting dispossession of farmer communities seems but an afterthought when, in reality, it is an affront to the industry and dignity of the very people who feed the rest of the world with food that they themselves often cannot afford to eat. Few countries illustrate the magnitude of the problem better than those in Asia, where rural unrest is set against the backdrop of poverty and political instability. It is in this context that the Asian Peasant Coalition (APC) was formed.

Now in its 15th year, the APC continues to unite landless peasants, farmers, farm workers, food producers, fisherfolk, indigenous peoples, herders and pastoralists in Asia. More than 15 million members commit to consolidating gains on the ground to defy all forms of peasant oppression.

It is the role of peasant movements like the APC to step in where governments fall short, where ruptures for social change can come forth. No shortcut can be taken to help the peasantry climb out of the ditch decades of subjugation has plunged it into, but the APC’s aims are nowhere near impossible: to assert the right to land in the pursuit of genuine agrarian reform, to sever the ties between states and transnational monopolies, and to upset the dominion of imperialist powers.

In many Asian countries, to say “land is life” is to speak not just of a matra but of a fundamental reality. Loss of land might as well be a death sentence to farmer families, indeed, as it entails loss of livelihood, security, and food. The estimated 15 million members people living in rural areas in Asia are bound to land, and it is upon their backs that the region imparted 49.8% of global agricultural value in 2013, according to the Food and Agriculture Organization (FAO) of the United Nations.

But while Asia boasts of vast tracts of agricultural lands, much of which, however, are worked by farmers and farm workers who own but smallholdings, if at all. Among the foremost campaigns of the APC has been to intensify the struggle against land and resource grabbing and all forms of exploitation that remain rooted in the monopoly of a small fraction of local landowners.

Centuries of colonial experience of Asian nations like the Philippines and India have entrenched such feudal arrangements in agricultural production. The APC, since its inception, has helped peasant organizations decry tenurial relationships that perpetuate bonded labor as payoff for land rents, debts, and threats of displacement that landless farmers find themselves worrying.

At its first general assembly in Dhaka, Bangladesh in November 2004, all member organizations recognized the tragedy in how more and more Asian people got mired deeper in landlessness, poverty, and hunger while doing all the work under unconscionably exploitative conditions at the behest of compradors and big landlords.

Almost 15 years later, current APC chairperson Poguri Chennaiah of the peasant group Andhra Pradesh Vyavasaya Vruthidarula Union (APVVU) in India would echo this sentiment at the APC’s fifth general assembly in Surat Thani province, Thailand in October 2018. While he recognized the victories on the ground — particularly the land occupation activities by a growing number of farmers of late — it still cannot be denied, Chennaiah said, that the majority of those suffering from malnutrition in the world come from Asia, the bread basket for all but its own peasantry.

With the scale of landlessness and land grabbing accelerating at an alarming rate over the past decade, the APC has tried to outmatch this injustice in its vow to intensify the fight for genuine agrarian reform founded on the principle of “land to the tiller.”

Yet expropriation of land is a problem that tenants face not only against usurious and abusive landholders but also against governments that offer little to no avenues for redress. Semi-feudal structures are no longer just shored up by a local elite but also by prevailing systems of law and governance that aggravate land insecurity. The state is as much to blame for its complicity, from inutile intervention in land conflicts to outright harassment or criminalization of peasant leaders. 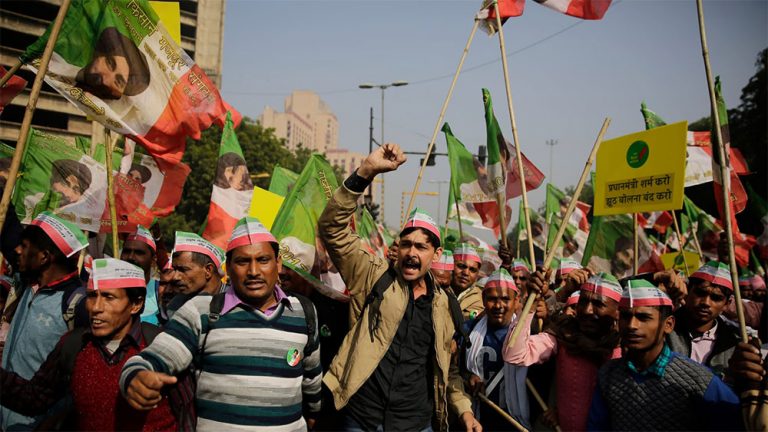 Tens of thousands of debt-laden Indian farmers descended on New Delhi to demand from the administration a one-time loan waiver in the run-up to the parliamentary elections, November 30, 2018. Poguri Chennaiah, chairperson of the Asian Peasant Coalition (APC), cited recent massive mobilizations in India as proof of the peasant movement’s resounding calls for the government to take action. (Photo: AP)

The APC has never wavered in calling out governments that sponsor all but the welfare of the peasant sector. It has also unabashedly professed its progressive stance, as in its first general program of action in 2004 which states its campaign to “resist the maneuver, betrayal, and divisive character of local regimes against the farmers.”

This objective is far from lip service. The coalition, for one, has supported mass demonstrations of peasants against policies typically hoisted under the banner of ‘development.’ “But is it the development for the people who have been depending on natural resources?” said Chennaiah. “Or is it for the small percentage of the people who are plundering what meager resources have been vested in the communities?”

Development projects are so called only from the vantage point of a private sector that receives concessions from government offices paralyzed by patronage, corruption, and profit seeking.

In Bangladesh, for example, the government has allowed much of the arable land it once vowed to distribute to landless peasants to be turned into residential and infrastructure developments or export processing zones. In Cambodia, while public lands attractive for tourism get privatized, the authorities tasked to resolve land disputes perform overlapping administrative functions and get embroiled in red tape. Indonesian mining laws, meanwhile, grant the state blanket power to encroach on indigenous peoples’ land to pave the way for operations of mining concessionaires.

Local farmers also rarely rely on the courts. The recent decision of the top court in India to reject the ancient ownership claims of over a million forest dwellers has not only triggered a series of protests but also evinced the anti-people bent of most legal instrumentalities.

Chennaiah remains hopeful, however, that public pressure would halt the eviction order, just as it did when tens of thousands of environmental defenders and subsistence farmers protested and forced the World Bank to withdraw its funding for the Sardar Sarovar dam in 1993, which would have displaced more than 140,000 villagers.

“The people’s resistance has been strong enough,” said Chennaiah, “to remind [the government] that its role is not to work as a broker for the corporate world but that it has responsibilities to the people of its country.”

Legal frameworks that facilitate land grabs and worsen peasant troubles could even take on more malevolent, blatant forms. From January 2017 to March 2019, PAN Asia Pacific (PANAP) has monitored through online news and reports from its partners a total of 101 cases of arrests, detention, and legal persecution worldwide, not to mention the 159 politically motivated killings related to land conflicts and struggles.

The deadliest country for farmers and land rights activists, the Philippines proves an interesting case study for the increasingly authoritarian tendencies in Asia, which the APC has identified as an emergent concern. Besides extrajudicial killings in the countryside, members of progressive groups and peasant activists are tagged as insurgents and suffer at the hands of alleged paramilitaries or state forces. Leaders like Philippine President Rodrigo Duterte are resorting to more than just incendiary rhetoric to muzzle with impunity the clamor against state-backed seizure of lands.

It would be short-sighted, however, to divorce the rise of authoritarian rule from the failure of the string of policies of liberalization, privatization, and deregulation that have set the stage for it to begin with. The APC recognizes that the plunder of Asian resources are indeed symptomatic of the expansionist takeover of international markets and of more dominant Western economies.

While land and resource grabbing is inherent in capitalism, it has become one of the linchpins of neoliberalism — the global order for the past four decades that has privileged big businesses over basic social services, tax cuts for the rich over decent wages for the working class, and, in agriculture, profit-oriented models over sustainable farming and equitable land distribution.

The impetus for global land grabs originates chiefly from the appetite of the United States and Europe for fuel, food, and warehouses in which to foist off their detritus and surplus. From this supply chain, the Global South stints on scraps in the form of foreign direct investments. In recent years, the rise of China as a new global power is also fueling greater conflict over land and resources, particularly under its ambitious Belt and Road Initiative (BRI) that so far spans 65 countries worldwide.

“Corporate plunder has been intensified along with globalization,” said Chennaiah. “We at the APC believe that no isolated country-level struggle can defeat these forces globally.”

The coalition continues to denounce the hand of multilateral institutions like the World Trade Organization (WTO), and the International Monetary Fund (IMF) and World Bank in wrecking local economies to the detriment of vulnerable groups like the peasants. In October 2018, former APC Chairperson Rafael Mariano talked at the coalition’s general assembly about the double burden of financial instruments like speculative funds and bonds that these institutions bank on to drive prices up.

Moreover, the public-private partnerships (PPPs) Asian governments foster with multinational lenders rest on an uneven ground. Funds for some conditional cash transfer (CCT) schemes, for example, partly come from loans from the WB and the Asian Development Bank (ADB).

“The CCT in the Philippines, Bangladesh, Indonesia, Pakistan and other parts of the world is actually a doleout program that merely exacerbates each country’s debt,” said Rahmat Ajiguna, chairperson of Indonesian peasant group Aliansi Gerakan Reforma Agraria (AGRA) in an APC statement on World Food Day in 2015. Currently the Internal Vice Chairperson of the APC, Ajiguna described the onerous policy conditions tied to these loans as ultimately damaging to food sovereignty of the borrowing, underdeveloped countries.

Recently, loans have been pouring in not only from the West but also from Asia’s richest nation China, which is now gaining muscle to rival the economic heft and military might of the US. It has cashed in on the collapse of trade barriers. Its BRI has been afoot and ensnared countries like Sri Lanka in debt bondage. Its neighbors Laos and Myanmar have had farmer families displaced to make way for Chinese-funded rails and dams.

As China continues its ascent and starts to harbor its own imperial desires, a great majority of Asian countries remains in the throes of rural backwardness. Such stagnation is telling of economies hitched to corporate and colonial/neocolonial structures of control. This comes at the expense of those at the bottom, whose resistance nonetheless remains alive.

This resolve and energy of the poor and landless to persevere in reclaiming their rights fuel the APC’s campaign for a more united front of peasants in the region. For too long, they have been paying the price for agrarian programs gone amiss and promises of relief still unrealized. When measured against the costs, their decision to rise up promises a better shot at a life with dignity.

Power to the Peasants: Reclaiming lands, reclaiming the future