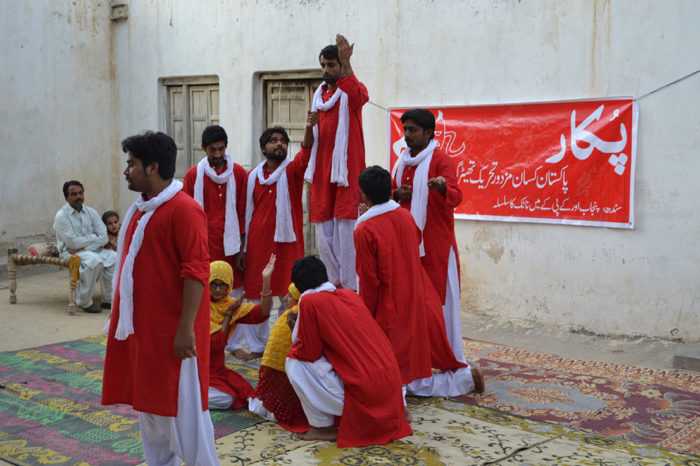 The PUKAR theatre group performing at a local village after the training on Interactive Theatre for Influencing in 2019.

Imam Uddin Soomro is an active member of the Pakistan Kissan Mazdoor Tehreek (PKMT), an alliance of small-scale and landless farmers including women farmers. Imam collects data on crops and conducts awareness sessions for farmers on sustainable agriculture, green revolution and globalization. As a member of a local theatre group named, PUKAR, since 2018, Imam also performs as an interactive theatre artiste in rural villages, organises learning events and writes articles on agriculture and farmers’ rights in local languages.

The PKMT was formed in 2008 as a result of a series of discussions among powerless farmers and social and political activists who felt that an organised platform to voice their demands was essential for small-scale farmers facing social and economic constraints.

“We perform plays that enable us to interact with different communities. The theatre plays address issues that are part of the PKMT struggle, including feudalism and the impact of corporate agriculture. As a theater performer, I was selected as a participant in a training tilted, Interactive Theater for Influencing, in July 2019. The training provided technical knowledge and capacity building opportunities on skills required to influence communities to bring about progress in the society. Our skills of script-writing, communications and character-building were further enhanced in the seven-day residential training.” said Imam.

All seven members of the PUKAR theater group participated in the training which gave them networking and experience- sharing opportunities with other like-minded participants. The session on ‘team building’ and ‘inhibition breaking’ helped participants self-assess themselves and understand their pivotal and influential position in society. Participants learnt about stage directions, allowing the audience to grasp every performers’ act and the message they are conveying through their role plays.

“We met with other theater groups from Peshawar, Sindh and Islamabad. All the groups had different interactive skills to perform as we all engage with different kinds of audiences. The members of other groups shared the issues they highlighted through their plays and how they passed on the resolutions,” shared Imam.

On the last day of the training, participants developed action plans to further implement the learning and skills learnt during the training.

“Initially, we would randomly select issues and base our plays on those issues. After the training, we altered our strategy. We now plan a meeting to identify the common issues that are prevalent in the communities through meetings with community members and develop a script for the play accordingly to work together to rectify the challenges people are facing. CWSA has extended support in reviewing the scripts which we plan to avail,” expressed Imam.

A group exercise that engaged the training participants in planning a theater play with other members of the group allowed collaborative learning and practical experience-sharing through coordination among the members. Imam narrated,

“When we acted with other theater performers, we learnt to show strong facial expressions as that also largely impacts the deliverance of the message and not just the dialogues. This joint exercise helped in modifying our acting and delivery gestures in order to have an even stronger impact in the communities we perform.”