Pakistan Kissan Mazdoor Tehreek (PKMT) and Roots for Equity held a press conference at the Karachi Press Club on February 10th, 2021 to protest against the decision of the Ministry of National Food Security and Research to start the registration process for granting intellectual property rights over plants and seeds under the Plant Breeders’ Rights Act, 2016. The registration process is due to start on February 15th, 2021. 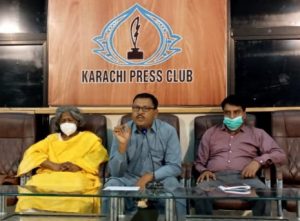 Seeds are living organisms and through genetic modification, transnational corporations are commodifying nature and seeking intellectual property rights to gain control of the seed sector. This is a criminal act and goes against the ethical dictates of society. Farmers’ organizations worldwide have been protesting against genetic modification (GM) of seeds and the enforcement of intellectual property rights over living matter since the creation of the WTO in 1995. The negative impact of GMOs on human health and environment has become apparent leading a number of developed European countries to impose a ban on GM crops.

The Plant Breeders’ Rights Act, 2016 basically takes away farmers’ centuries old traditional rights of saving, exchanging and selling seeds. As a result of national and transnational seed corporations claiming intellectual property rights over seeds, not only will the country become dependent on corporations for national food security and food sovereignty but the royalties paid to transnational corporations for IPRs will massively increase seed prices. Farmers, who are already reeling from the impact of increased production costs and reduced crop prices, will have to shoulder the added burden of procuring the specific agricultural inputs mandated by the seed companies.

The Ministry of National Food Security and Research has requested for the registration of seed varieties for cotton and maize even though national cotton production has been facing decline and destruction due to the use of international GM seeds. Due to this, not only have the small and landless farmers been deprived of local and indigenous cotton seeds but as a result of relentless pest attacks causing crop failure, landless women agriculture workers are also being deprived of their livelihoods. On the other hand, the national economy is dealing with the high costs of cotton imports.

PKMT filed writ petitions challenging the Seed (Amendment) Act, 2015 and the Plant Breeders’ Rights Act, 2016 before the Full Bench of the Lahore High Court arguing that these laws could not have been passed by Parliament in light of the devolution under the 18th Amendment, and that these laws ignore and trample upon farmers rights as recognized by Pakistan, which is party to the International Treaty on Plant Genetic Resouces for Food and Agriculture. In this light, the formation of the Plant Breeders’ Rights registry and the registration for IPRs on seeds by the Ministry of National Food Security and Research can be considered illegal and unethical. PKMT will be filing a stay application against the launch of the Plant Breeders’ Rights Registry before the Lahore High Court.

PKMT totally repudiates the Plant Breeders’ Rights Act, 2016 and demands that all laws granting control over agriculture to imperialist states and corporations should be nullified. PKMT and all small and landless farmers of Pakistan humbly request the respected Lahore High Court to recognize the principles of Food Sovereignty by swiftly reinstating farmers’ traditional rights over use, control and access of seeds in context to its sale and exchange.